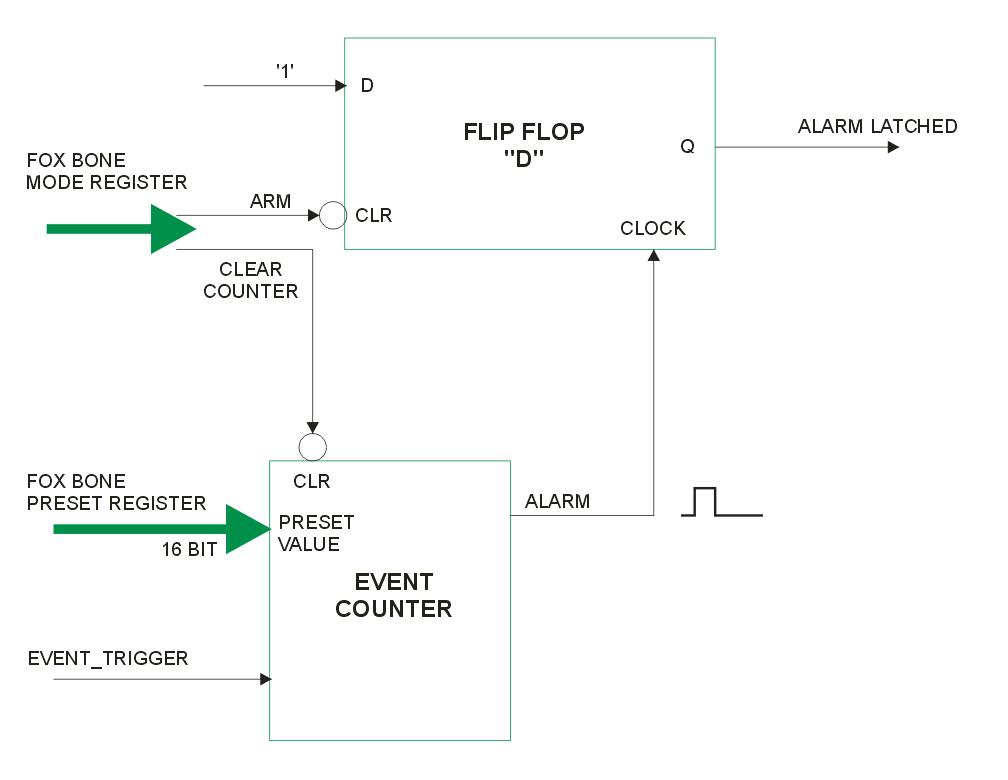 Block diagram of the EventCounter1 function

This example presents a 16 bit programmable event counter that has also a memory alarm. It can be used to wait a programmable number of pulses/events occurring on the EVENT_TRIGGER line before setting up a very fast permanent signal of alarm on the ALARM_OCCURRED port signal. The example will show how to program it to light up an external LED when the programmed number of pulses is reached. This example uses, as usual, a Fox Board coupled with a Fox VHDL board.

Signature release register values for this example (How To access FoxBone registers from the FOX BOARD):

The example is composed of two VHDL files. The first file: EventCounterWithAlarm1.vhd that realizes the inner part of the example with the logic needed to implement the Event Counter, with also the filter for the race conditions of the counter.

The other file FoxBone_EventCounter1.vhd is a wrapper file that permits the working of the event counter under the FoxBone specifications. So we will be able to access the Event Counter functionalities through some foxbone registers from the Fox Board software side. This file adds also a D flip flop to be used as a permanent alarm condition flag.

In particular, these are the relevant FoxBone registers for this application and their meaning:

The Event Counter function is realized using the code of two other examples: UpCounter1 and Equal Comparator 16 bit.

There are three processes working together. The first, upcounter, is a 16 bit counter that is incremented on rising fronts of the external EVENT_TRIGGER signal.

The second process is a 16 bit Comparator that recognizes when the upcounter reaches the PRESET_VALUE programmed, rising the EQUAL signal.

The third process is a modified version of the Comparator, called filteredComparator. It makes the comparison between the PRESET_VALUE-1 and the counter at every occurrence of falling edges of the EVENT_TRIGGER so it is not affected by race conditions of the upcounter. When the counter has reached the PRESET_VALUE-1 the process sets high the variable (armed). The new output signal is the AND operation between this armed signal and the EVENT_TRIGGER so the final result will be a high pulse only when it will occr the n-th pulse on the EVENT_TRIGGER line, avoiding all the races since the comparison is made on the opposite front of the EVENT_TRIGGER signal with respect of the increment (with races) of the upcounter.

How to test it immediately

To try immediately the EventCounter function you can download and save on your PC the FPGA programming file: FoxBone_EventCounter1.stp.

Then follow the programming instructions on: Flashing the FOX VHDL FPGA with a new hardware image to program the Fox-VHDL FPGA.

To program the FPGA and test it you should have the Fox programmed with a fimage capable to drive the Fox-VHDL board.

Now we are ready to test our Fox-VHDL Example EventCounter1.

Connect together pins JP3-5 (output of Fox PortB7) and JP3-36 (input of the EVENT_TRIGGER for the Event Counter).

Connect also a LED or an oscilloscope to the ALARM_OCCURRED output (JP3-8). The LED will lit when (after the reset of the event counter) the n-th rising edge will be sensed on the EVENT_TRIGGER input. The value of "n" has to be written in the foxbone register 0x0041 as explained in the following.

Schematic of the hardware connection

Download and save on the Fox Board directory /mnt/flash the following program to be able to generate events for the Fox VHDL Event Counter on the Fox Board PortB7 output pin that is located also on FOXVHDL Board JP3-5: PB7pulses. Then make it executable with the command:

Now you are able to generate a number of pulses on the output port PB7 of the Fox Board. You can also insert as parameters the uptime and downtime for the pulses. Invoking it without parameters it is possible to see an example of use:

@idea To have a look at the inner workings of this simple program download its source: PB7pulses.c

So to operate correctly the Event Counter1 function do the following from /mnt/flash where you saved before the PB7pulses program:

The following oscilloscope display shows the result on the FOXVHDL JP3 pins. 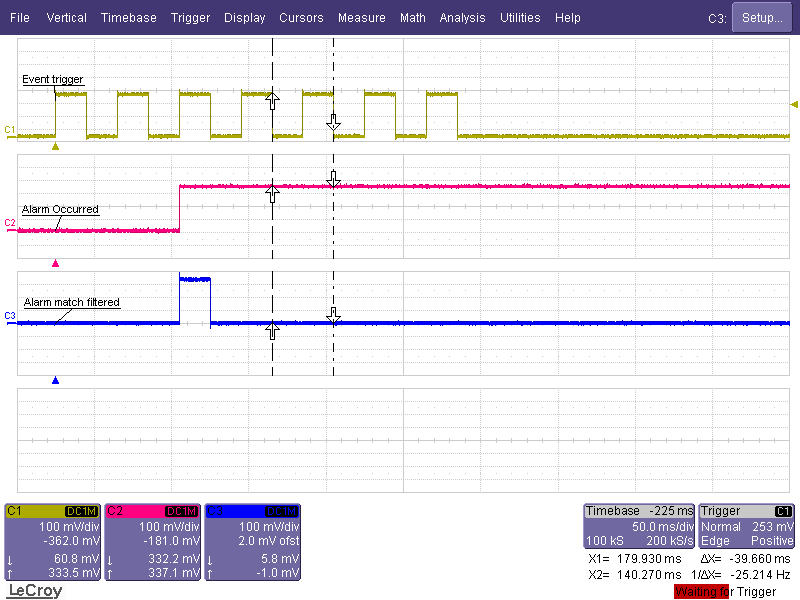 Oscilloscope display of the Event Counter test for count = 3

In the following display instead we show the third rising front of the Event Trigger input (connected by a wire to the port PB7) zoomed in time to show the delay between the input trigger and the output of the hardware function. It is possible to see that the circuit programmed inside the FPGA is capable to react to the n-th pulse within 12 nsec. 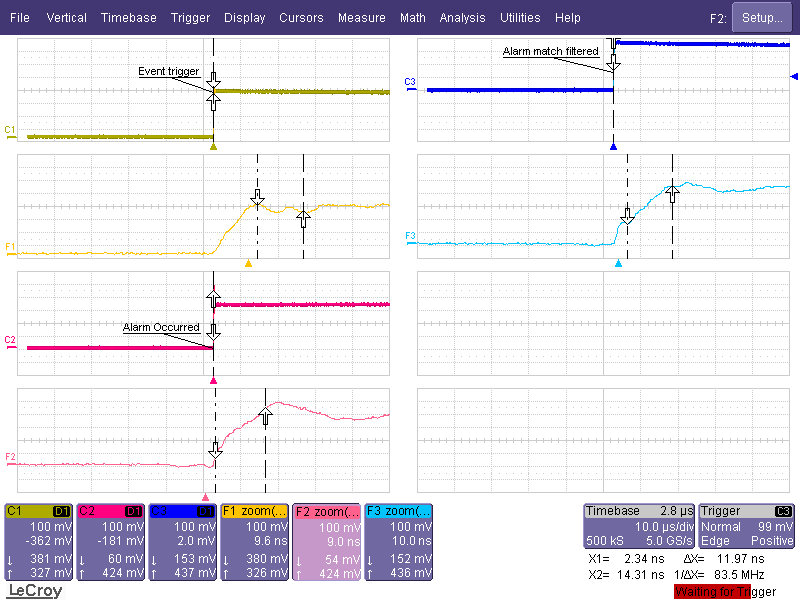 Test the Event Counter1 with the event application

Inside the FOX image able to program and drive the FOX VHDL board, there is also installed a kernel driver specifically designed to operate with the foxbone registers of the foxbone Event Counter1 application. In other articles we will explain how to build a Linux kernel driver for a foxbone peripheral so to exploit the max performances from it. Here we would like to show a simple way to interact with the Event Counter1 function with a simple command line tool that is also inside the FOX Board image fimage_300_v100.zip.

As you can see above, invoking event from a console or telnet session of the FOX, you can have the possible options to use the tool. It is very simple to use this tool also inside a script. To be able to generate the same output as above from the Event Counter1 function, operate as follows:

Here is reported the sourcecode of the event tool to show the way to write a program that uses the custom kernel driver of the Event Counter1 foxbone function: event.c

@idea To continuously monitor the status of up to four FoxBone registers from a console session you can find useful this little utility: A FoxBone Register Monitor Utility

This is the Status Report for the Event Counter1 through FoxBone that can be obtained in the Libero Designer session under the Menu: Tools - Reports - Status Report after the Layout compiling phase of the project. As you can see The logic for the Event Counter function and relative FoxBone registers are occupying only 4,98% of the FPGA logic space.

Here is the link to download a zipped copy of the entire FoxBone_EventCounter1.zip Libero 7.1 project. Please refer to the Libero projects download and installation page to be able to recompile the project, to simulate it and generate the programming .stp file to program the FOXVHDL FPGA.

The only very important file to consider other than the .vhd files of the project, is the physical constraint file that maps the port signals of the VHDL project to the physical pins of the FPGA. It is easy to see that the maximum effort has to be applied to avoid mistakes on this file, since a wrong map of an output of the FOXVHDL board to an output of the Fox Board can result in a misfunctioning or to a damage for the internal output stages of the Fox-Board or the FOXVHDL board. We provided current limitation resistors on all the lines to avoid this but we cannot guarantee against a very wrong mapping of several outputs together, so be very careful when mapping the physical pins of your application.

You can find here the FoxBone_EventCounter1.pdc constraint file that is also, when installed the project in your PC, under the projects FoxBone_EventCounter1\constraint directory. You can see in the .pdc file, for every function pin, other than the settings for its electrical behaviour, the mapping to the correct physical FPGA pin. You can face this information with the schematic file of the FOXVHDL board to see that they couple exactly for the interfacing with the Fox Board J6 and J7 connectors. The output function signals have instead been routed to the FPGA pins that are connected to the external connector JP3 of the FOXVHDL Board.